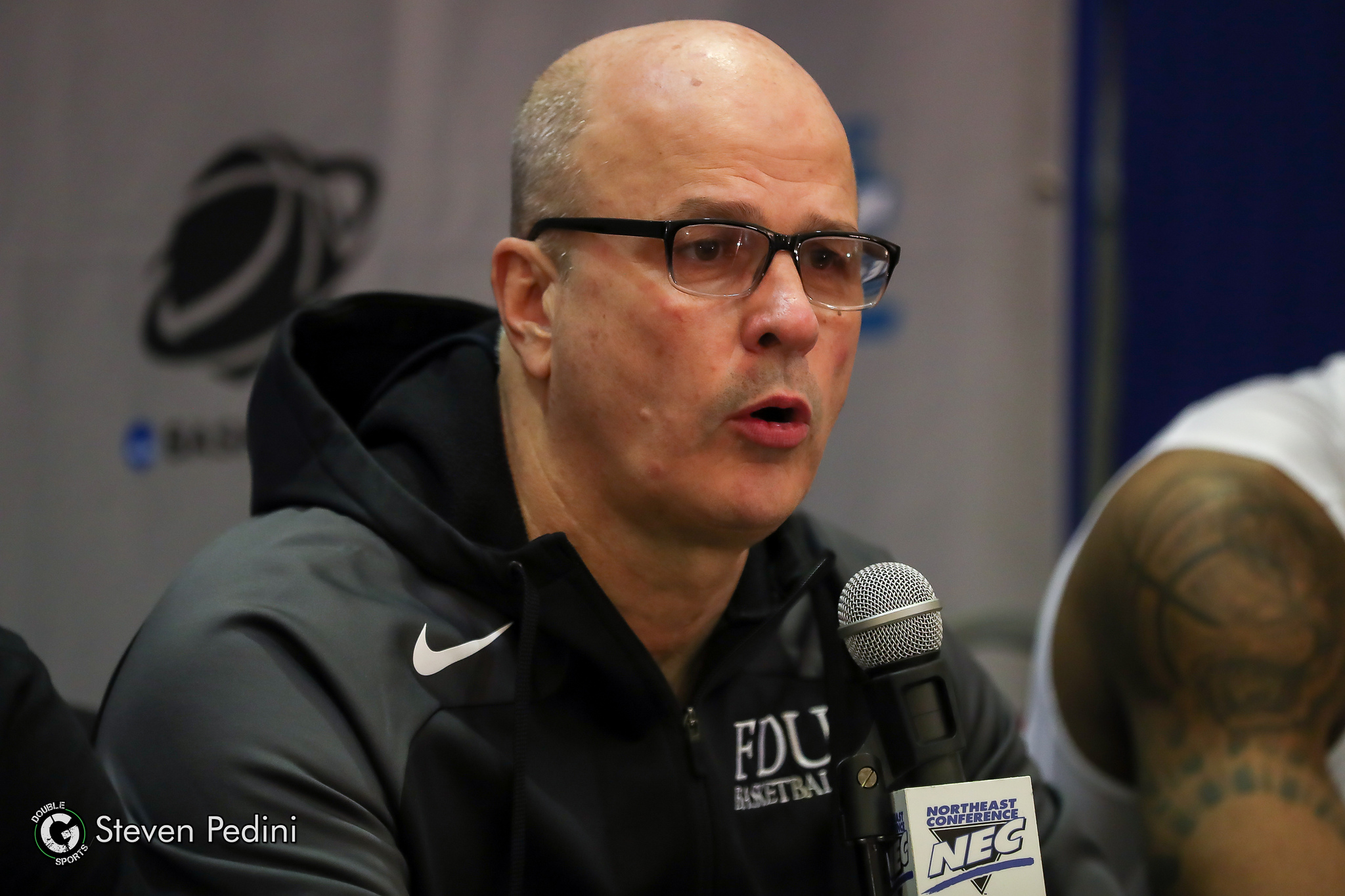 Heading into halftime of Saturday’s NEC Tournament Semifinal against Robert Morris at the Rothman Center in Hackensack, New Jersey the Fairleigh Dickinson University Knights were feeling confident even with a slim 28-26 advantage. A 9-0 spurt to put them up 25-21 with less than five minutes to go, shooting 50 percent from the field and 44 percent from three-point land.

Once the second half got underway, the Colonials caught fire from behind the arc knocking down four trifecta’s. Tied at 32-32 with less than 15 minutes remaining, Robert Morris went on an 11-1 run in a blinding span of three minutes. FDU had difficulty holding on the ball turning it over 15 times leading to 22 point for the Colonials.

Just when it seemed the wheels were about to come unglued for the Knights, a collective trio of players led by senior guard Darnell Edge, Jahlil Jenkins and Brandon Powell stemmed the tide timely buckets. Edge pouring in 15 of his game-high 20 points while Jenkins tallied 11 of his 18 points. Trailing 52-44 with nine minutes left, FDU surged back with a 10-2 run capped off by a lay-up from Edge with less than five minutes to go.

“In the first half, they did a good job of guarding me and getting me out of my rhythm,” said Darnell Edge. “In the second half, Coach (Herenda) is always telling me to come out aggressive, teammates got me the ball and in position to get my shot off. I told my teammates we don’t give up, we knew they would make their run, this is our building and make our run eventually, accomplish defensive assignments and stay confident”

After Matty McConnell canned a triple putting Robert Morris back up with less than five minutes remaining, Powell returned the favor sinking a trey. Down 60-59 with two and half minutes to go, Edge gave the Knights a huge lift needed with a nifty spinning jumper that led to a three-point play.

With the game hanging in the balance in the remaining two minutes, it was two vital rebounds that sophomore forward Elyjah Williams snagged to keep the ball in the Knights possession. Draining 8 of 10 free throws in the first half, FDU continued to sizzle from the charity stripe line swishing 14 of 17 but it was Jenkins and Edge that sealed the Knights 66-62 victory hitting four free throws in the final 14 seconds. Powel finished up with 11 points while Mike Holloway Jr. added 10 points.

Herenda on the win, “I give credit to our opponent, we were fortunate to win this game. I have the utmost respect for the Robert Morris program, when I came here Robert Morris were the champions and best team in the league. In six years we’re right there with them and we’re going to a championship game. This is special for our team, program and university.”

“We still shot 50 percent from the floor and 40 from three against second overall defense in the nation. The numbers are startling because had 17 turnovers. Elyjah Williams got an offensive rebound and kept the play alive on the free throw.”

Next up for FDU (19-13) is the NEC Tournament Championship where they will take on the number one seed St. Francis (PA) Red Flash (18-13) at DeGol Arena in Loretto, PA on Tuesday March 12 at 7:00 p.m. During the regular season the teams’ split the series. The Knights will be aiming for their 6th Northeast Conference Tournament Championship and first since 2016. Being a number two seed has been a lucky number as FDU has won their last three NEC titles and four of their five championships.

“The first year we wanted to win it and this year we have to win it and totally different perspective,” Herenda said. “We were the third youngest team in America. Just getting there was cool, now we have gotten there and have to go win it now. This year we knew were capable for a long time and expecting to do it that adds pressure. When we do get pressed I said to embrace it and have fun with it.”