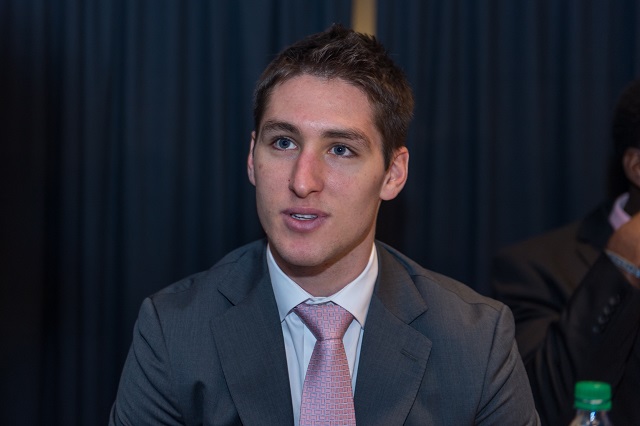 This is looking like the year that Coach Jay Wright and his Villanova Wildcats may be able to finally put the finishing touch on their incredible regular season records.

Over the past two college basketball seasons ‘Nova has dominated the Big East regular season, conference championships and with those great accomplishments they have earned high seeds in the NCAA tournament.

But all of that has been tempered by their inability to get past the first weekend of the NCAA tournament.

Last year’s loss on the first weekend to NC State as the No. 1 seed still lingers but also provides a strong dose of motivation for the Wildcats.

But optimism abounds on the Villanova campus and this year seems to have a different feel to it.

Wright and his team appear focused on the long haul and have their eye on a Final Four and an opportunity to hoist the trophy, just like Rollie Massimino’s team did in their Cinderella run to the 1995 NCAA title.

But there is business to take care of in the Big East and Villanova has the nucleus (skill, size and depth) to reign supreme once again.

For starters, the Wildcats have one of the best backcourts in the country led by senior Ryan Arcidiacano.

Arcidiacano, cut in the mold of a scrappy, playground-type point guards, is one of my all-time favorite players.

He’s a magician with the basketball in his hands and a coaches’ dream because he loves to get at it on the defensive end.

The senior will be joined this year by MacDonald’s All American, and one the nation’s top high school recruits, Jalen Brunson.

Brunson’s presence, along with returning veteran Josh Hart, should give Wright one of the most dynamic three-guard combos in the country.

Hart is an outstanding shooter from long-range, and with Brunson distributing the basketball, Arcidiacano can focus on becoming more consistent from beyond the arc.

Phil Booth and Donte DiVincenzo should not be overlooked and will provide Wright with plenty of depth to help the Cats get through a rigorous Big East season.

In the paint, the Wildcats can count on the ever-improving and somewhat under rated 6’11” Daniel Ochefu.

Ochefu is an accomplished shot blocker and rebounder who can score but needs to be a tad more consistent on the offensive end.

All of this talent and Wright’s proven ability to win (and dress!) at the elite level make Villanova my choice to rule the Big East and one of my preseason favorites to advance to the Final Four.

Seton Hall Coach Kevin Willard (82-81), who is entering his 6th season at the Pirates helm, is looking to take his team back to the NCAA tournament for the first time since 2006.

The Pirates got off to a roaring 13-3 start last year but then were hit by a host of internal team squabbles that resulted in a poor 3-12 finish.

Willard feels those team chemistry issues are a thing of the past.

Seton Hall has a solid backcourt returning in Isaiah Whitehead and Khadeen Carrington and one of the Big East’s top rebounders in Angel Delgado (9.8 rpg).

If Willard can get the contributions from his bench that many are projecting the Pirates should be a factor in the Big East.

The big news in Jamaica, NY is in the return of former St. John’s All American and NBA great Chris Mullin as the Red Storm’s head coach.

Mullin has a huge mountain to climb as he attempts to restore the basketball program to the glory days of the past and to successfully recruit in the basketball rich New York City area.

It will take a ton of patience for loyal St. John’s to endure, as the Red Storm roster was decimated by the departure of previous Coach Steve Lavin and the Mullin hiring, which put the program in a big time recruiting hole.

Keep your eye on newbies Federico Mussini in the backcourt, board banger Darien Williams and Pitt transfer Durand Johnson.

Unfortunately for Mullin and staff this is going to be a long term rebuild project.

Nobody has taken a three-point shot yet, but on paper, it is looking like the Big East will have five teams in the NCAA field (Xavier, Villanova, Providence, Georgetown and Butler) with perhaps Seton Hall sitting on the proverbial bubble.

Blast from the past?

In addition, Cormier, who attended the University of New Hampshire, was a pitcher for the Chatham A’s in the Cape Cod Baseball League.

Jeff Neubauer takes over the coaching reigns at Fordham University this year replacing Tom Pecora. Neubauer, a Jon Beilein disciple, comes to the Bronx after a successful run at Eastern Kentucky.

The Rams haven’t reached the big dance since 1992, and unless Neubauer has some tricks up his sleeve, this year promises to be more of the same.

I’ll have my eye on the Temple Owls next week as the regular season is fast approaching…. keep shooting….