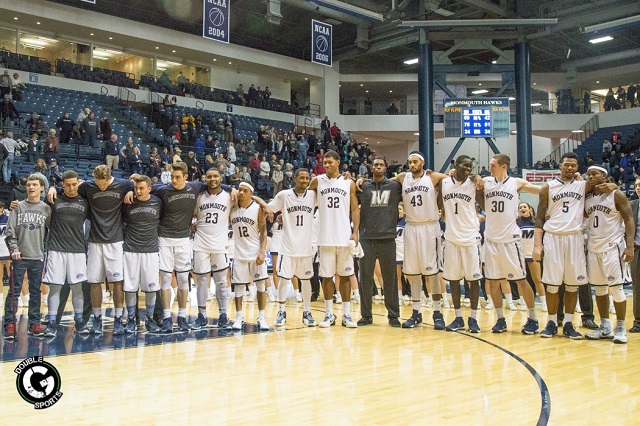 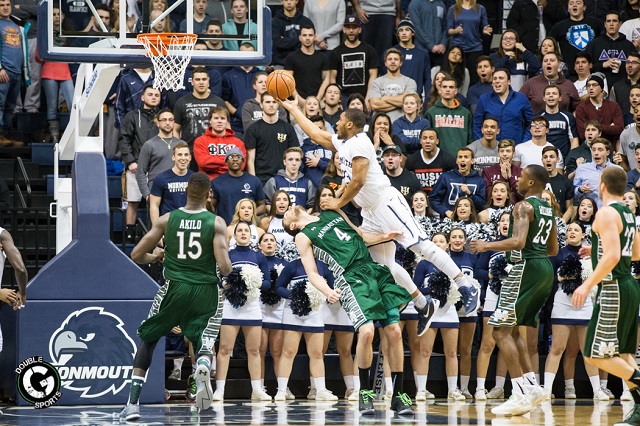 Monmouth University (27-7, 17-3 MAAC) failed to wrap up an automatic bid to the NCAA tournament when they lost to the Iona Gaels (22-10, 16-4 MAAC) in conference tournament final but all hope is not lost for Coach King Rice and his Hawks.

Earlier in the year, many bracket sooth-sayers predicted the Hawks were a lock for an at-large bid (last appearance 2006) because of their non-conference wins over the likes UCLA, Notre Dame, USC and Georgetown.

However, UCLA and Georgetown have suffered through woeful seasons and those wins take on lesser importance in the eyes of the selection committee.

The Notre Dame win may get the Hawks over the top as they have advanced to the semifinals of the ACC tournament where they will face UNC.

Will the Hawks make it a two-bid league for the MAAC?

I say yes and Rice and Company can thank Vanderbilt, Syracuse and Clemson, among others, for poor showings in their respective conference tournaments.

I suspect they will get a No. 16 seed and draw someone like a Kansas, Michigan State, Virginia, Villanova, West Virginia or Oregon in their first-rounder and have the opportunity to become the first No. 16 to knock off a No. 1.

These are exciting times in West Long Branch, NJ.

Will Stony Brook punch their ticket?

Coach Steve Pikiell’s Seawolves (25-6) will look to expunge their NCAA curse of the past few years when they take on the red-hot Vermont Catamount’s (21-12) in the America East final tomorrow morning at the USB Sports Complex.

Seniors Jameel Warney (Plainfield, N.J.) and Carson Puriefoy (Wenonah, N.J.) each posted double-doubles to lead Stony Brook back to the championship game with an 80-64 win over Hartford.

Vermont edged New Hampshire, 63-56, behind 19 points from Ethan O’Day and 13 from Kurt Steidl in the America East Semifinals.

The Catamounts have won seven straight since losing 100-93 at UMass Lowell on February 8.

It’s the NIT for the Pride

Unfortunately, the Pride is a long-shot for an NCAA at-large bid and will have to settle for an extended season in the NIT.

Hat’s off to the Pride for a great year and a deep run.

It’s a just reward for a superb season that has been rocked by the mysterious withdrawal from the university by their senior captain Jack Montague on February 10.

The Ivy League made major headlines the other day when they announced that they will hold a four-team conference tournament to determine what school receives the league’s automatic bid.

The Ivies became the last of the major conferences to adopt a season-ending tournament. I always felt the Ivies did it better, with the athletic competition coming first and the money second.

The Boston College Eagles made NCAA history recently, but it’s not the kind that a school can be proud of having accomplished. The Eagles are the first major conference school since World War II to go winless in conference play in basketball and football. The Eagles made it 0-19 when they lost to Florida State in the opening game of the ACC tournament.

Rebuilding any Division 1 college basketball program is a tough job but trying to do it in the talent-rich ACC is a monumental task. Buzz Williams has done a remarkable job at Virginia Tech but unless BC commits to a serious upgrade in facilities and scores on the recruiting front the road could be all uphill for Christian.

Villanova and Xavier appear to be headed for a showdown in the Big East tournament with a lot at stake including a No. 1 seed in the NCAA tournament.

How about this prediction… The Friars and Pirates will advance to face each other in the final!

The Duke Blue Devils have won 19 ACC tournament championships since the tournament first started in 1954.

They will not have a chance for No. 20 as they lost an overtime thriller to Notre Dame in the quarterfinals.

(Various wire reports used in the compiling the column)

Rutgers Pro Day: Who else shined in front of NFL scouts?
Atlantic 10 Tournament: Saint Joseph’s And Dayton To Meet In Semis On Saturday
Posting....