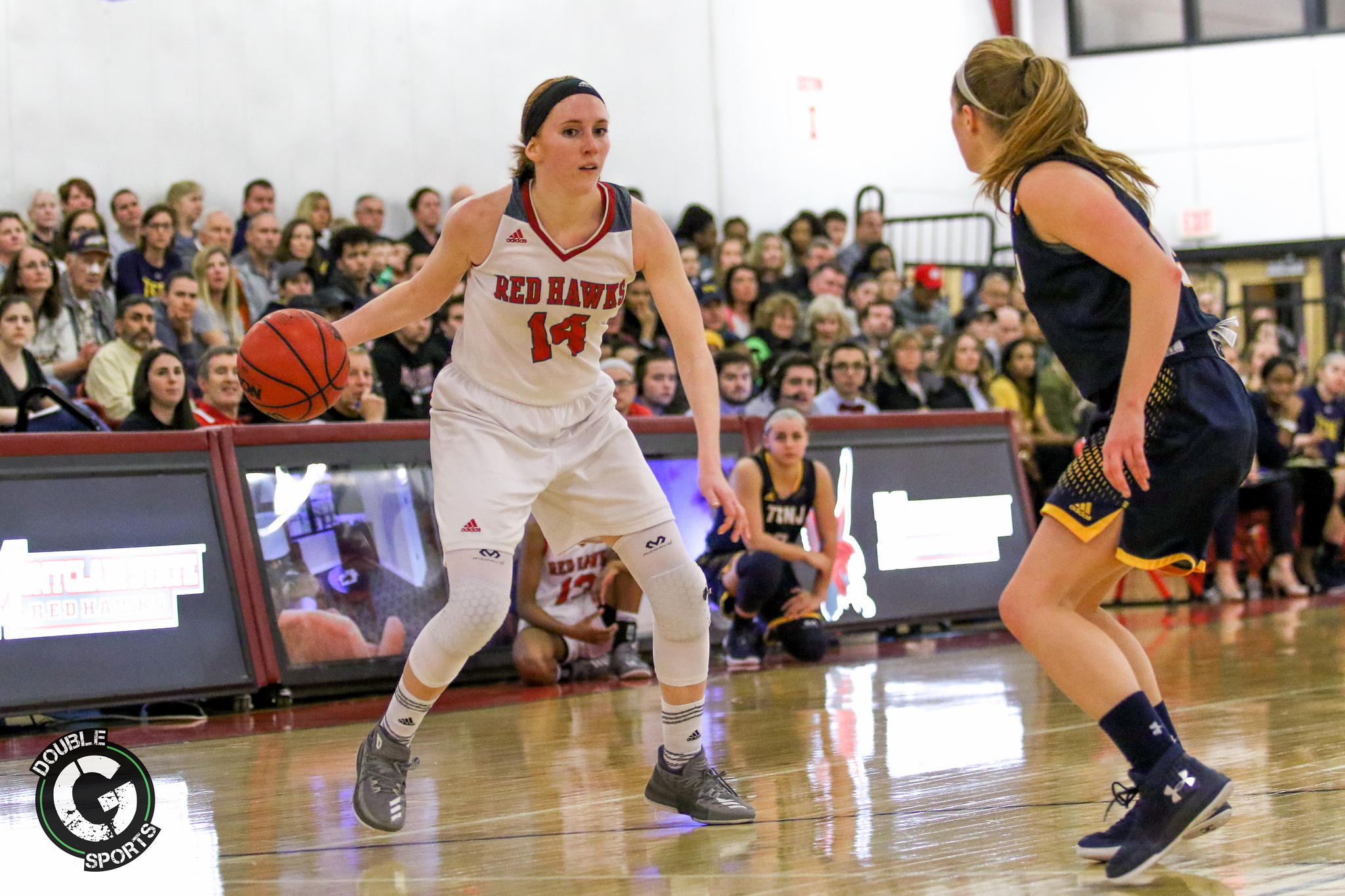 Not even 24 hours removed from a NCAA Tournament first round game victory over The College at Old Westbury at the Panzer Athletic Center, the Montclair State Red Hawks returned to the hardwood court for a second round showdown against a potent Gettysburg College squad that sported a 26-2 record and winners of 16 in a row.

The Red Hawks did not display any fatigue racing out to an 18-9 lead after the first quarter. In the second period, Montclair State boosted the advantage to 22-9 with 8:37 remaining. When Gettysburg chipped away at the margin, it was freshman Kim Calloway fresh off a 13-point game against Old Westbury burying trey. The Red Hawks employed a balanced scoring attack led by senior Taylor Harmon scoring nine points while shooting 56 percent from the field as Montclair led 32-24 at intermission.

“One of the better games, if not one of the whole best games we have played this season,” said Head Coach Karin Harvey. “We really had a good first quarter, defended really well, ran the sets and looked comfortable. We did a tremendous job defensively against a great Gettysburg team. A quick turn around to absorb all the information I gave them. Kim (Calloway) and Jane (Mayfield) playing the point guard today made a world of difference defensively, Jane did a great job on defensive rebounding and had a really good week of practice and stepped up today and looked a like a junior today. Alex McKinnon guards the conference player of the year (Emily Gibbons) and holds her to eight points.”

The real catalyst on this night was senior Katie Sire, after scoring a game high 24 points and 12 for 12 from the free throw line on Friday night, Sire caught fire in the second half attacking the basket relentlessly, registering 18 of her game high 26 points. Montclair torrid shooting continued in the third quarter knocking down 7 of 10 shots from the perimeter and outscoring Gettysburg 21-11 to take a 53-35 advantage into the final quarter. The Red Hawks showed no let up in the fourth shooting 80 percent from the field while sinking 9 of 14 free throws coasting to the 70-45 victory and advancing to the Sweet 16 for the first time since the 2012-13 season. Harmon added 14 points while Katie Tobie contributed 13 points.

The Red Hawks held Gettysburg to 22 points below their scoring average, limiting leading scorer Emily Gibbons to eight points. Montclair dominated the glass, out rebounding Gettysburg 39-27 and points in the paint 28-20.

“I couldn’t be happier for these guys, deserve it and worked so hard for this all season,” Harvey said. “The three seniors have gotten us to this point all season, happy and proud of them. These guys get to play another week of college basketball. This one feels a little different, this year wasn’t easy and a lot of different challenges. It took us five months to get to this game and see the finished product is great feeling.”

“With a minute to go I thought of two things, I get to coach these players for another week, how cool is that and wow, I can’t believe how far we have come in a single season. I’m not sure a team has done a better job coming this far, we have seen more girls in a season than I have ever coached and tremendous accomplishment to all the players and coaches for their dedication and commitment. To get back to the Sweet 16 is not easy and it takes everybody, all 10 players and 4 coaches.”

Next up for Montclair State (25-3) is a Sweet 16 match-up on Friday March 9 against undefeated Amherst College(29-0) with a location and time to be determined. The Mammoths defeated Saint Joseph’s (Maine) 53-47 in the second round.