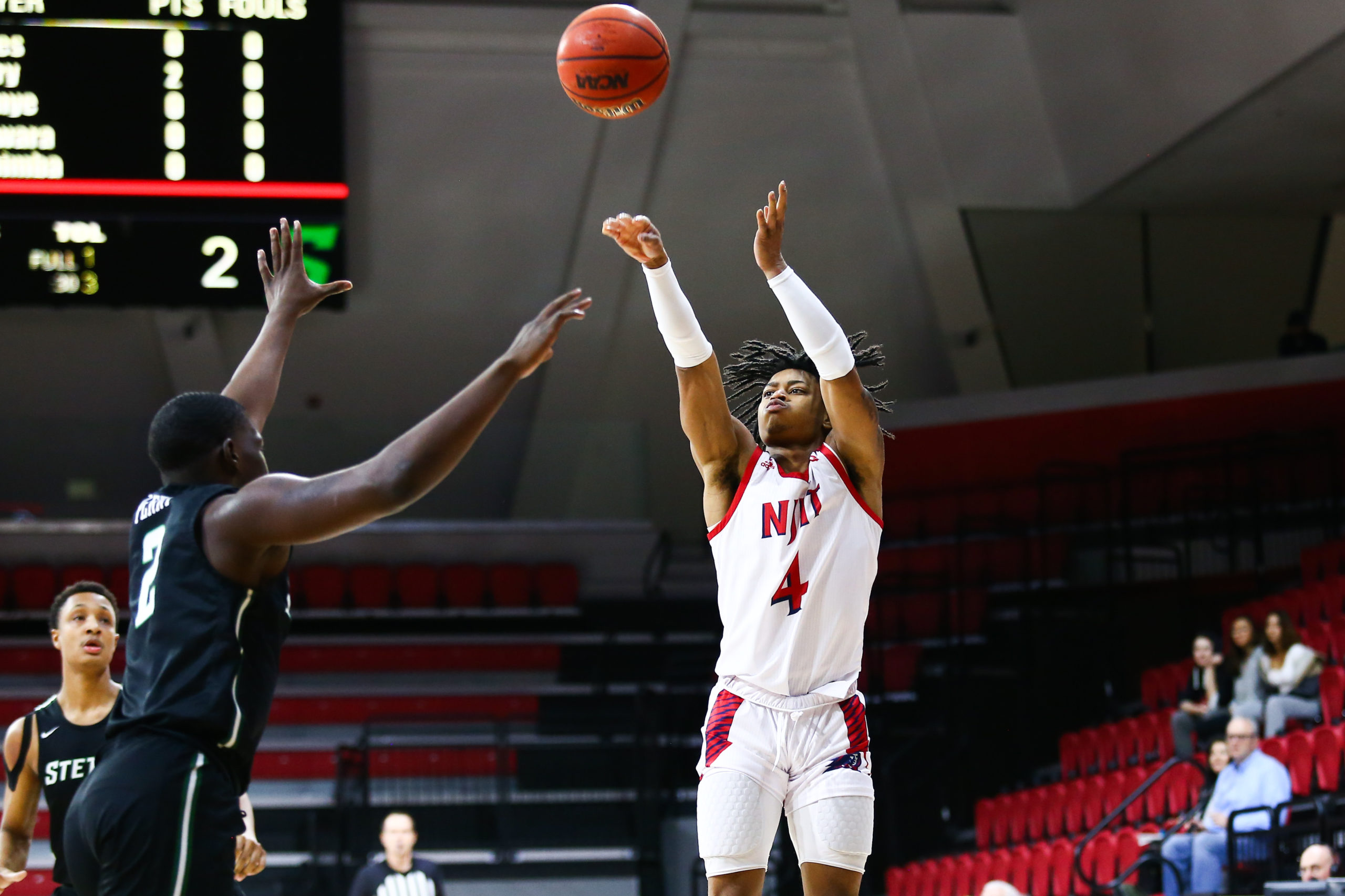 Mired in a five-game losing streak, including back-to-back road losses at Lipscomb and Liberty, the NJIT Highlanders men’s basketball team returned to the Wellness and Events Center on Thursday night facing off against Stetson University. The last time both teams’ met on Jan. 23 at the Edmunds Center in DeLand, Fla., the Hatters won by a single point 65-64.

Stetson scored the first points of the game, but the Highlanders responded with an 8-0 run and never relinquished the lead. NJIT methodically increased the advantage to double figures at 24-13 with five minutes remaining in the first half. The Highlanders came out firing on all cylinders offensively with, Zach Cooks leading the charge scoring ten points. The team buried six trifecta’s, dishing the ball off with seven assists, and controlling points in the paint, second chance points 12-4, and bench points 9-4, leading to a 34-26 advantage at halftime.

“I think we have just been reeling about the losses,” said Cooks. “We have the last two home games of the season and wanted to come out with a lot of energy, made a couple of shots and play defense and take it from there.”

Leading by six at 37-31 with 16 minutes left, the Highlanders hit another gear with an 8-0 run. Using a pressure defense that forced Stetson into committing 15 turnovers. In turn, that created fast-break transition points and 20 points off turnovers. As a result, the margin grew to its largest of the game at 54-39 with nine minutes on the clock.

However, the Hatters answered back with a 7-0 run to narrow the gap to single digits with less than seven minutes to go. Shyquan Gibbs hit a pair of jump shots that boosted the lead back to double figures at 60-46.

“We kind of upped the pressure, we started it early and they started it late and we forced our will,” said Gibbs. “Defense led to offense and just got some run-outs, got up in our press and some turnovers.”

Maintaining a comfortable lead with two minutes remaining, it appeared NJIT was on its way to victory. But Stetson ignited a furious rebuttal in the last minute and change by trimming the deficit to 69-65 with less than a minute left. Free throw shooting would determine the outcome and the Highlanders prevailed in the clutch with Diego Willis sinking 3-of-4, freshman Levar Williams dropping 6-of-8 in the basket as NJIT hung on for the 78-69 win.

“It’s hard to win Division I basketball games,” said head coach Brian Kennedy of the win. “The guys came out with the mantra of refusing to lose tonight. We were well down at Stetson for 35 minutes and they did a nice job of coming back the first game. We wanted to make sure this game if we did get a lead that we took care of the ball and hold onto it, unlike down there. We did have a stretch of two turnovers but did a good enough job of making enough free throws to get the victory.

“They are the third-place team and one thing about this group having embraced when the offense is not there, you can defend and rebound no matter what. If shots are not going your way, help the team win. Diego [Willis] did not have a lot of points, but did a nice job of defending and rebounding the ball. Shyquan did a nice job on the kid Perry, and Zach carried the load offensively scoring and getting to the basket. Souleymane [Diakite] getting the ball off a missed foul shot and rebounding. We got good minutes off the bench from Levar. We’re still a young team and got guys out there learning and adapting well.”

The Highlanders (8-18, 5-8 ASUN) wrap up the home portion of the 2019-20 regular season at the Wellness And Events Center against Florida Gulf Coast (8-20, 5-8 ASUN) on Saturday, Feb. 22 with tip-off set for 4:00 p.m. When the teams’ squared off last time on January 25, NJIT won a nail biter 56-54. In addition, the game marks Senior Day with Gibbs and Reilly playing their final regular season home game in an NJIT uniform.

“Before the game tonight, my heart was pounding a little bit,” Gibbs said. “It’s coming to an end, but trying to make the best out of it. Coming from Fleisher to here. When you walk in here with the bright lights, huge arena, it’s a different atmosphere and been great for the last three years.”

“Happy for our guys and big announcement tonight with Reilly Walsh getting First-Team All-District Academic All-American and helps him to get to the next round,” said Kennedy of Gibbs and Walsh’s Senior Day. “I told the team we have two seniors and been an incredible honor to coach them. Shyquan and Reilly have done everything the correct way.

“They are not 25-point scorers, but when you open up the dictionary and says student-athlete, both of their pictures should be there. Never one incident off the basketball court, honor students, and Academic All-American type kids. A real pleasure and honor to coach and we’ll be out there playing for them on Saturday.

“We just have to keep playing hard and grinding away. The conference is very bunched up. Keep plugging away and never know where you are going to end up. Play the opponent in front of you.”