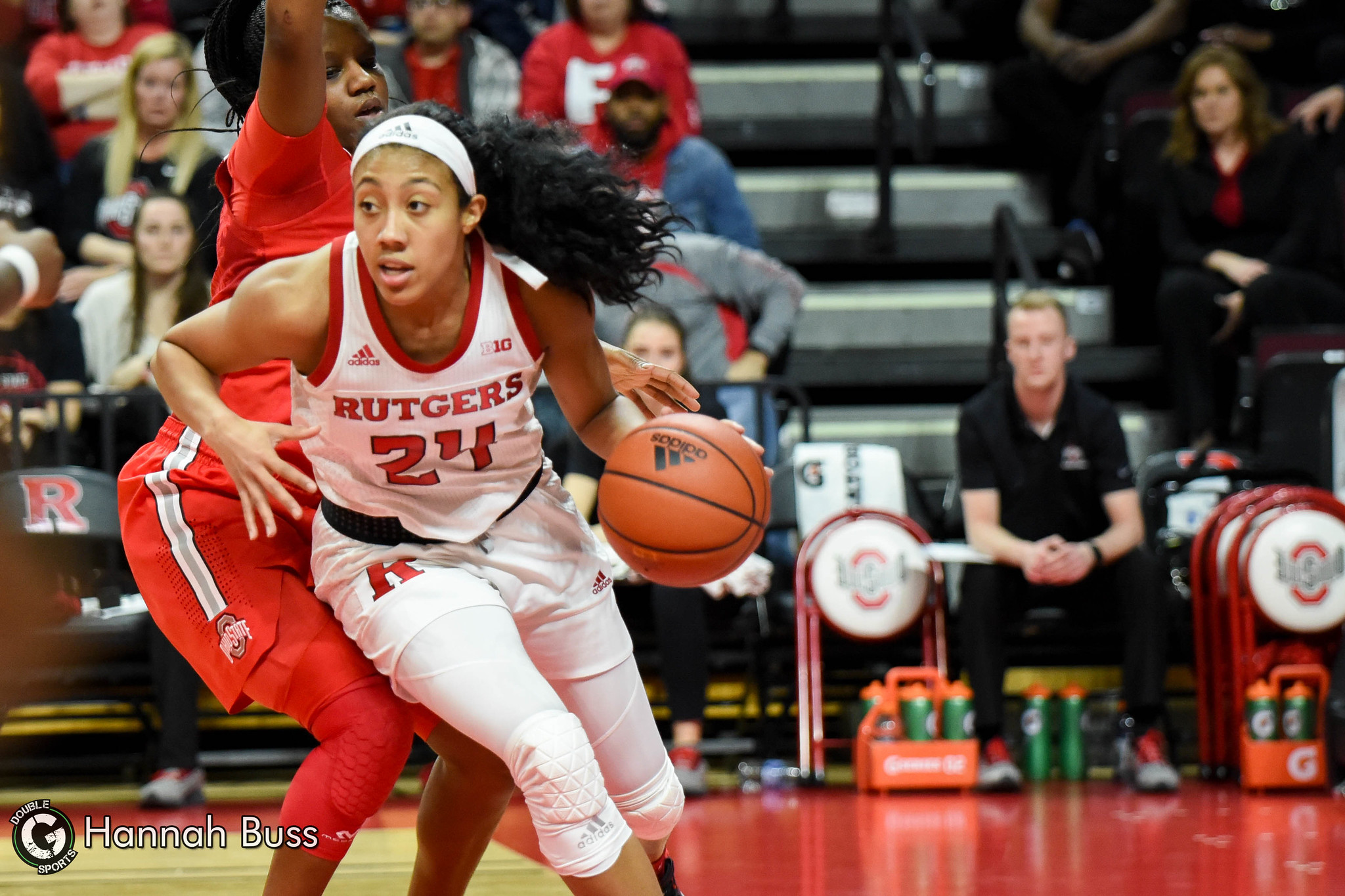 In one of the most exciting games of the season, the Rutgers Scarlet Knights took down the Ohio State Buckeyes, 59-57, at the RAC. Rutgers star guard Arella Guirantes put on a show for the hometown fans, netting a career-high 36 points in the victory.

Guirantes has been the indisputable star for the Scarlet Knights all season long, but she put it into another gear on Saturday afternoon. Guirantes entered the game as the second-leading scorer in the Big Ten (20th nationally) with 19.3 points per game. She has led the Scarlet Knights each and every game and Saturday was no different.

Guirantes started the game hot, closing out the first quarter with 12 points under her belt already. After scoring only two points in the second quarter, Guirantes erupted in the second half. She put up nine points in the third before closing out the game with 13 fourth-quarter points. Guirantes hit big shot after big shot, including the game-winner. With just over four seconds remaining, Guirantes pump-faked and hit the clutch jump shot to put the Scarlet Knights ahead.

Just as it has all season, the Scarlet Knights defense was key in the team’s victory. Rutgers struggled on the defensive end in the first half but got the job done when it mattered most. The Scarlet Knights were able to hold the Buckeyes to just three double-digit scorers, a feat not so easily accomplished against Ohio State. Coming into the matchup, four or more players had scored in double figures for the Buckeyes in eight of their last ten. Rutgers was able to keep the Buckeye offense in check and allow only 36% shooting from the field.

One area the Scarlet Knights will look to improve on is their perimeter defense. Rutgers has allowed 19 three-point field goals in its last two games. Nine of those threes came against the Buckeyes, with seven coming in the first half. The Scarlet Knights have proven to be an outstanding defensive team, but they may need to limit the three-pointers in order to have continued success.

Back and Forth Action

The game was characterized by non-stop action on both ends of the floor. Both teams were willing to put the pedal to the metal in this one. When it was all said and done, the game consisted of 13 lead changes. There were several moments in the game where it seemed that one team was poised to run away with it, only for the other team to come up with a run of their own. The non-stop action led to one of the most exciting finishes of the year.

The Scarlet Knights will look to improve on their 12-2 home record when they face-off against Wisconsin on Thursday at 7 p.m. at the RAC.