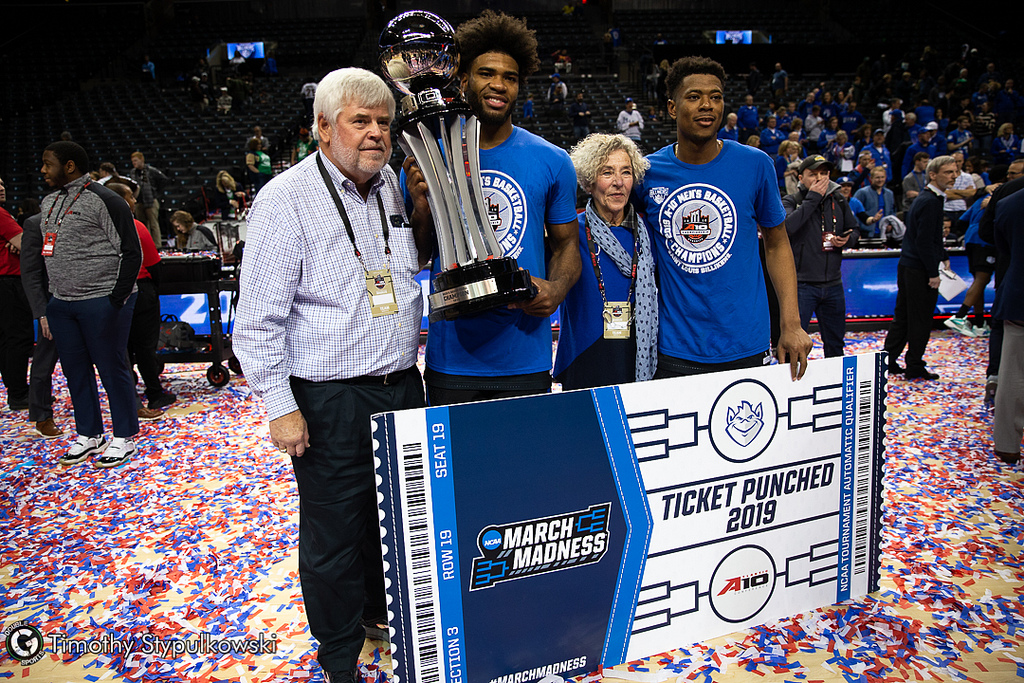 Saint Louis held on to defeat St. Bonaventure to win the Atlantic 10 Tournament at Barclays Center.

Sunday’s championship matchup for the Atlantic 10 championship featured two teams that many assumed would not be in the title game. The winner between Saint Louis and St. Bonaventure would take a bid away from a bubble team as Selection Sunday drew near. The winner would also get the A-10 two teams in the NCAA Tournament and draw a tough matchup in the Big Dance. With all that said, both sides wanted to put on a show in Brooklyn.

St. Bonaventure began hot shooting over 50 percent jumping out to an 18-5 lead early on. The Billikens started the game 0-for-11 from the field hitting their first field goal at the 11:43 mark of the first half. From then on, Saint Louis went on a run going 6-for-11 shooting to cut the Bonnies’ lead to 24-19 with five minutes remaining in the half.

St. Bonaventure, after a scoreless stretch, went on a 10-0 run to extend their back to double digits at 34-19. The first half ended with the Bonnies once again going scoreless for the final three minutes as Saint Louis was able to cut the lead down to single digits. St. Bonaventure led at the half 34-25.

The offense for Saint Louis continued to chip away at the St. Bonaventure lead as a 7-0 run cut the Bonnie lead to 41-40 with 11:05 remaining in regulation. A Courtney Stockard three-pointer snapped a four-minute scoreless streak for St. Bonaventure to push their lead to four.

In what was a game of runs throughout, Saint Louis went on 7-0 run to take a 49-46 lead with 6:37 left, their first lead since being up 2-0. Dion Wiley’s three gave the Billikens a 52-46 lead as St. Bonaventure could not score to keep up with St. Louis, who got a second wind late. Down 55-50, Stockard hit a three-pointer to cut the St. Louis to two at 55-53. Stockard, St. Bonaventure’s best offensive player, committed his fifth foul on the ensuing defensive possession to leave the game.

After Javon Bess missed the front end of a 1-and-1, the Bonnies had three opportunities to tie or take the lead and were not able to connect. In the end, it was a tale of two halves for both the Bonnies and Billikens. After shooting 39 percent from the field, St. Bonaventure shot just 26 percent. St. Louis shot 48 percent, up from 28 percent in the opening half.

“The second half give Saint Louis credit. They came after us,” said St. Bonaventure coach Mark Schmidt. “They are a very good halfcourt defensive team. They took away some of our actions and really made it a one-on-one game.”

Jordan Goodwin led Saint Louis with 16 points and 14 rebounds. Javon Bess added 11 points for the Billikens, who will make their tenth appearance in the NCAA Tournament. They received the 13th seed in the East Region and will take on four seed Virginia Tech on Friday in San Jose, CA.

Courtney Stockard finished with 22 points to lead the way for St. Bonaventure.