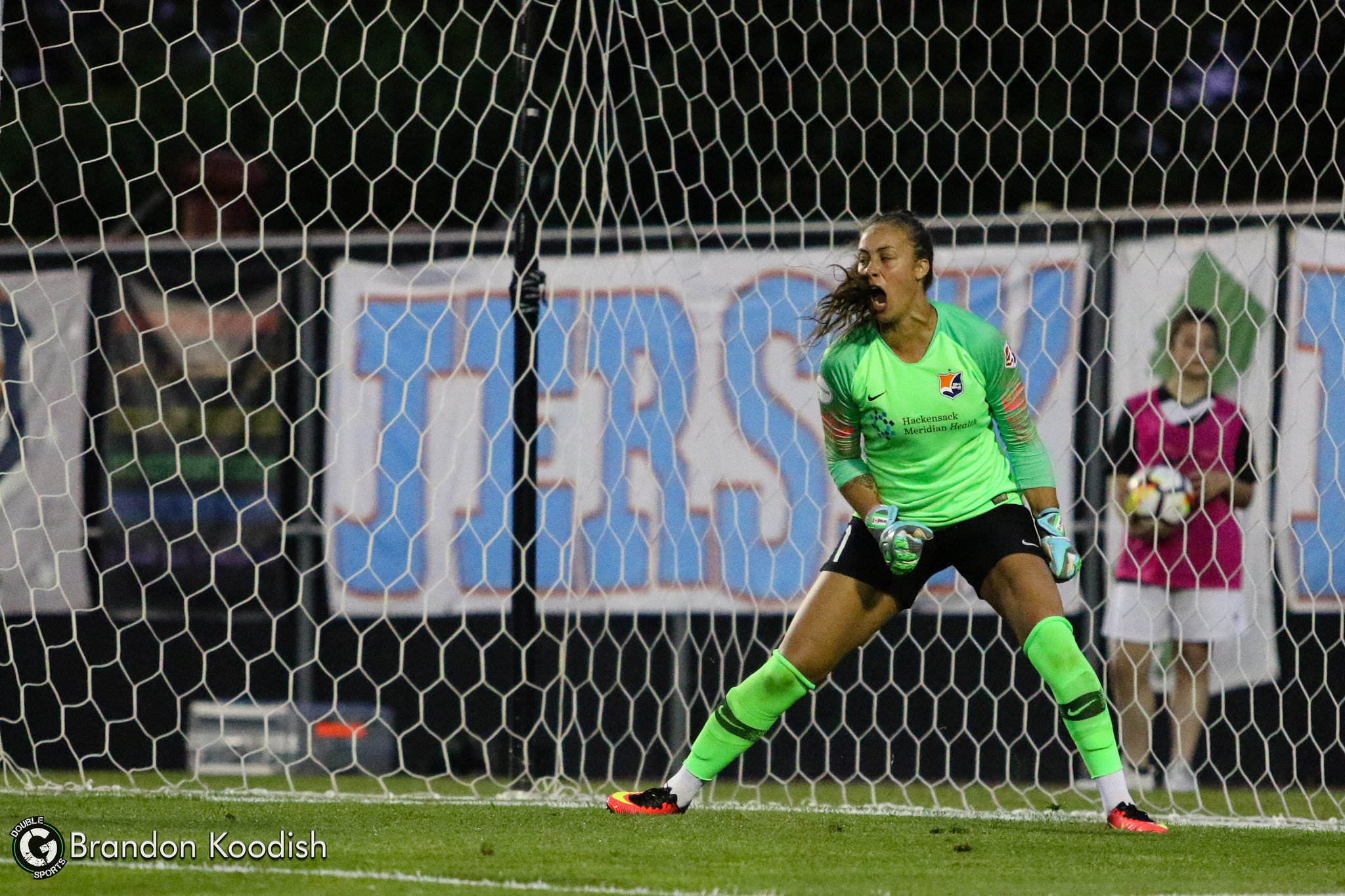 Piscataway, NJ (June 8, 2018) – Sky Blue FC (0-8-2, 2 points) was able to maintain possession of the ball, and create better opportunities during Friday’s night fixture. The NJ team dominated most of the match against the Washington Spirit (2-7-3, 9 points), and Sky Blue’s goalkeeper, Kailen Sheridan, was the hero of the night in front of a crowd of 2,188 fans.

The Spirit started on the attack early on in the game, at the 12th minute Estefanía Banini makes a run on the left side, dribbling Sky Blue defender Christina Gibbons. Benini finds the shot, which goes high off the far post but sends Sky Blue a warning message.

Sky Blue sees an opportunity at the 28th minute when Katie Johnson sees Madison Tiernan on the right wing. Tiernan gets in the box area, tries to dribble and the rebound is intersected by McKenzie Meehan, but her shot goes out of bounce for a corner kick.

The Washington Spirit will see another opportunity at the 32nd minute, but Banini’s shot is easily caught by Sheridan. The game will go into halftime scoreless.

Sky Blue comes out to a much better second half. Creating more opportunities with Shea Groom and Johnson in the final third, but they are unable to capitalize. A penalty is called against Sky Blue at the 78th minute, but it is Sheridan who will come to save the point for Sky Blue, and keep a clean sheet and the score at zero. Well deserve point at home for Sky Blue.

“No, I didn’t but something that my college coach always taught me is to just wait. If you can get there, you don’t have to guess,” said Sky Blue’s goalkeeper Kailen Sheridan when asked about whether she knew she was going to deny the penalty shot. “That’s the only thing I thought about to not guess today and just go with it and it worked out. Just wait, trust yourself. You’re here for a reason, trust yourself” added Sheridan.

Things are definitely looking better for Sky Blue FC; particularly on the past two games. The players are connecting more, not getting frustrated and overall, having fun on the field. Although the NJ team continues to hold a winless streak, one would argue that the match against the Washington Spirit does not reflect on the only two points the team has earned this season.

Sheridan expresses her optimism on where the team is headed. “Every week we come back and work as hard as we can, because we know we have it in us”, she said, “every single person on this team is a talented soccer player,” Sheridan added.

“I think we dominated 90% of the match. The good thing is we were organized and confident enough”, said Sky Blue’s head coach Denise Reddy, who was happy with the overall performance and the style of play the team maintained. “First zero. First shoutout, even we we had to save a penalty kick that’s not deserved, but that for us is the tipping point right there”, Reddy added.

This match was also a good opportunity for the NJ head coach to see some new players on the starting XI or subbing, who would otherwise would not be having as many minutes if it was not because of six other Sky Blue players that were out on international duty. “Great to see some players that I haven’t see… some got starts and did awesome. We didn’t change our style”, said Reddy. “With a bunch of new players, that’s actually rewarding. The subs were awesome. The game never slowed down” she added.

Sky Blue FC visits Orlando Pride on Saturday, June 16 for a 7:30pm ET kickoff. The match will be live-streamed on go90.