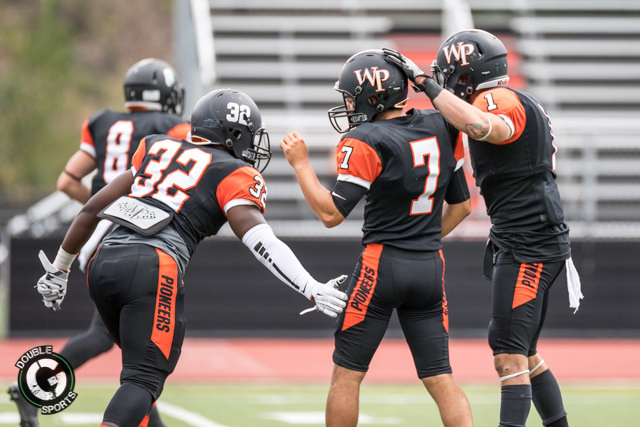 You could not have scripted a better start to the 2016 season for the William Paterson University Pioneers as they dominated Alfred State 43-13 on Saturday at Wightman Stadium in Wayne, New Jersey.

On their first offensive series, Junior quarterback James Waldron (10 for 14, 130 yards, 34 rushing yards) engineered a 12 play, 90-yard drive that chewed up 7:34 of the clock resulting in a six-yard touchdown pass to senior wide receiver Malcolm Robinson (eight receptions, 110 yards). The defense went to work denying Alfred State a first down on forth & second from its own 45. Waldron wasted no time flashing a quick-strike ability by heaving a 45-yard bomb to a wide-open Robinson down the right sidelines making it 14-0 with 2:39 left in the first quarter.

“We’re doing some things differently on offense and nice to see it mix up between the run and pass,” Head Coach Jerry Flora said. “A great all-around game and we have been preaching ‘team’ the entire off-season and it doesn’t matter what each guy does individually as the sum of the whole is better than the individual. The defense has been progressively better and first week of camp was different as we had some new faces out there and pleased with the effort.”

Alfred State responded immediately catching a break on an 80-yard pass from Dashon Turner to Jason Gordon that deflected off a Pioneers defensive back. Two plays later, Turner hooked up with Gordon again on a short three-yard score trimming the lead to 14-7.

William Paterson’s defense rose to the occasion again with Alfred State gambling on a forth and three from their own 37, sophomore Haneef Jennings picked off a Turner pass. The Pioneers offense steadily drove down field eating up four minutes off the clock capped off by Waldron throwing his third score of the game, an 11-yard fade pass to senior Anthony DiMarsico in the back corner of the end zone. Attempting a two-point conversion, sophomore Stephen Lahoe blasted through the middle of the line stretching the advantage to 22-7.

Sophomore linebacker Tyler Gross came up with another big sack forcing a three and out by Alfred State. Robinson electrified the home crowd returning a 71-yard punt back to the four-yard line. On a third and goal from three, Robinson dazzled again with a jet sweep score increasing the margin to 29-7. The Pioneers were not finished scoring in the first half as Lahoe made his presence known on defense stripping Turner of the ball and freshmen Taheem Jennings scooped up the ball and rumbled back 40 yards expanding the lead to 36-7.

“We played just like in practice, watched film, and put the hard work on the field,” said Malcolm Robinson. “James (Waldron) is talented because he can run and throw and believes in himself. He showed what he can do today and reason why we won.”

The Pioneers play their first New Jersey Athletic Conference game of the year on September 16 at Rowan University starting at 7:00 p.m.