Despite winning a school record 26 games, the NJAC regular season and conference tournament championships, and a first round NCAA Tournament game, the Ramapo College Roadrunners did not meet their own expectations. The Roadrunners were eliminated from the NCAA Tournament after falling to second round opponent Keene State in overtime, 92-91.

Ramapo is attempting to reach its first Sweet 16 in the NCAA Division III Tournament since 2005.

The Roadrunners enter the 2017-18 season ranked No. 5 in the D3hoops.com Top 25 preseason poll and No. 2 in the Street & Smith Small College Top 10 Preseason poll. They were selected as the unanimous favorite to win the NJAC Conference

Ramapo is looking to achieve even higher goals this season and win their fifth NJAC regular season title since 2004-05. The schedule early on is difficult, with six conference games before 2017 concludes.

With the bulk of the roster returning, including five seniors, the Roadrunners are led by Thomas Bonacum. As a junior last season, Bonacum led the team in scoring (17.1 per game) and rebounding (6.6) to earn NJAC First Team All-Conference/Male Athlete of the Year as well as numerous national accolades and honors.

Bonacum is listed as a D3hoops.com Preseason First Team All-American. 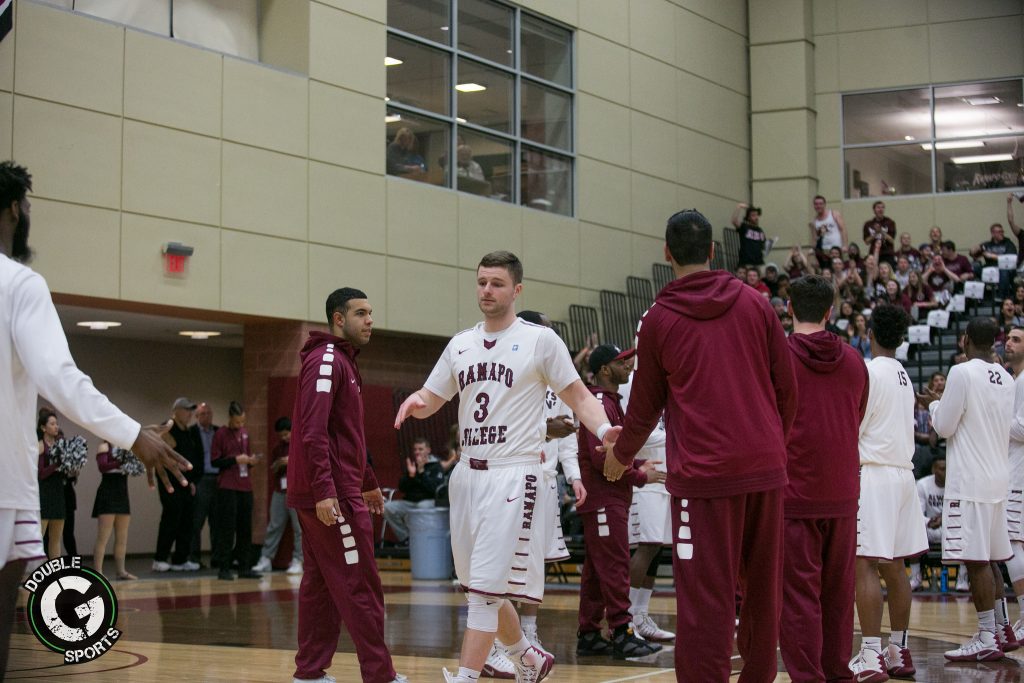 Joining Bonacum as a key member of the Roadrunners roster is Christopher Moseley, second team NJAC All-Conference selection who started all 29 games last season. Moseley was second on the team in scoring (12.7) to go along with 3.7 rebounds per game.

“Based on how we finished last season, ranked fifth in the country and picked by all 10 coaches in the conference to finish first puts a lot of expectations on us,” said Head Coach Chuck McBreen. “We have a tough opener against Randolph-Macon College and the bulls eye is on us.”

“I can’t wait to get down there and start playing,” Bonacum said. “A long off-season visiting plenty of doctors and enduring physical therapy. It tore me up not being 100 percent and I worked so hard to get to that point. We flew under the radar for half of the year until people started recognizing us and now every team we play is going to be their championship game. The motto for us always will be one game at a time and last year the way it ended left a sour taste in our mouth and everyone worked even harder this offseason.”

The Ramapo backcourt is experienced, with senior captain Josh Ford and Jimbo Long, both of whom started all 29 games last year. Ford averaged 9.7 points per game while Long tallied 6.1 and was named to NABC Honors Court for work in the classroom.

Ramapo did however lose two key contributors from last season in Sultan Aminu and Cory Soanes.

After coming off the bench last season, Nick Stanek slides into the starting position held by Aminu. Stanek played in all 29 games last season averaging 8.1 points and 4.6 rebounds. Also returning is sophomore Patrick Peterson who also came off the bench, chipping in with 7.8 points per game and shooting over 80 percent from the free throw line. Ramapo added depth to the bench bringing in two Division II transfers in Matt Latka from Dominican College and Rob Lewis from Bloomfield College. In addition, Rob McWilliams, a Division III transfer.

In August, Ramapo traveled up to Montreal and Ottawa where the team got in 10 practices and played three games.

“A tremendous experience for the guys and able to bond together and play top-notch competition,” said McBreen. “Only the returning players could participate and other teams’ could not start until October 15.”

Last season not only turned out to be special on the court for the Roadrunners, but off as well.

“We visited the Brandywine Assisted Living Center where the players were involved with the residents in a two-hour question and answer session,” the head coach explained. “They watch our games on live stream and this season we have invited them to a game. It makes us feel proud and to have impact on these people and part of their evenings to sit back and watch Ramapo basketball. A positive experience for myself, coaching staff and players.”

Entering his twentieth season as the head coach of the Roadrunners, McBreen was named NJAC Coach of the Year for the 2016-17 season. His overall record at the school is 343-172.

“There were only three winning seasons before I came to Ramapo and inherited a 5-20 team not known for basketball,” McBreen said. “There were coaching changes made every three to five years. I am proud of the accomplishments and have had some great players and been able to bring success to the institution.”

The Roadrunners open the season against Randolph-Macon at 3:00 p.m. on Saturday in the Fifth Annual Pablo-Cotto Tip-Off Tournament hosted by Marymount University in Arlington, Virginia. Ramapo’s home opener at the Bradley Center in Mahwah, New Jersey is Tuesday (Nov. 21) against NJAC rival William Paterson at 7:30 p.m.